Many people do not know that there are two types of fully licensed medical doctors in the United States – one receives an M.D. degree, “Medical Doctor,” and the other receives a D.O. degree, “Doctor of Osteopathic Medicine.” The licenses to practice medicine held by both are legally and professionally equivalent. [1]

Medical school education for M.D.s and D.O.s is equivalent, with the exception that D.O.s not only receive training in pharmacology (prescribing medication), basic medicine, and surgery, but also receive extra training in the musculoskeletal system, a vital component of the human body. Like an M.D., a D.O. can specialize after basic medical training is completed, and become, for instance, dermatologist, surgeon, pediatrician, gynecologist, or any other specialty. So why have two separate degrees for what would appear to be the same thing? To understand this, we need to look at the history of medicine in this country.

Two hundred years ago, medicine was barbaric. Bloodletting, arsenic, and mercury “treatments” were the mainstay of medical doctors. Dr. Andrew Still, an M.D. practicing in the 1800s, stood by and watched helplessly as his young children died of meningitis. This traumatic event was a turning point for Dr. Still. For the next 10 years, he studied the human body and better ways to treat disease.

Dr. Still’s philosophy was both simple and profound: “To find health should be the object of the doctor. Anyone can find disease.”[2] In addition to being a critic of the day’s therapeutic “remedies”, Dr. Still was also a forward thinker and realized that improvements in health care were greatly needed. He believed that the physician’s role was not to just dictatorially prescribe remedies, but to help the patient reach a healthier condition. To enhance the body’s natural healing ability, Dr. Still stressed preventive medicine, good nutrition, and exercise, as well as the importance of a properly functioning musculoskeletal system—a major component of the human body. He introduced techniques to improve blood flow and musculoskeletal balance, which included correcting the alignment of bones (hence the term osteopathic, from the Greek osteo, meaning “bone,” and the Latin pathic, meaning “suffering”). Dr. Still established these osteopathic principles in 1874 and implemented them into his own practice. He emphasized that the object and aim of the osteopathic profession was “to improve and advance our present systems of surgery, obstetrics, and treatment of general diseases to a more satisfactory position than they now hold.”[3]

Dr. Still’s philosophy became the School of Osteopathy, now known as Osteopathic Medicine, named after its original emphasis on the musculoskeletal system. Osteopathic medicine went on to father physical medicine and rehabilitation, physical therapy, and the Western healing arts that involve using hands to improve body mobility and function.

As western medical science advanced with the development of the germ theory and the discovery of antibiotics, osteopathic medicine followed suit, providing education to its students in medicine and surgery as well as osteopathic treatment. Today, both M.D. and D.O. medical school programs are nearly identical-with the same intense coursework-except that D.O. medical students are required to take additional coursework that covers the musculoskeletal system, physical medicine, and osteopathic philosophical principals. Medical residency programs are mixed with D.O.s and M.D.s working alongside each other, and in many specialties Board certification exams are the same for both D.O.s and M.D.s, therefore, the term Osteopathic has a philosophical origin but, for the modern D.O., is a bit of a misnomer because today’s D.O. is a complete medical doctor, with the added benefit of this extra training.

“I chose Osteopathic medicine because it aligns with my concept of healthcare: embracing preventative medicine and nutrition, where the doctor and patient work together toward the common goal of excellent health. And of course, being an Osteopathic physician has given me tremendous insight into the musculoskeletal system, and ultimately led me to Prolotherapy.” – Dr. Alderman

Dr. Alderman is a leader in the advancement of regenerative medicine, particularly in the area of musculoskeletal repair. She serves on the editorial board of Practical Pain Management and the Journal of Prolotherapy, and has written multiple scientific and clinical papers, and book contributions, including the first published protocol for Biocellular (Stem Cell-Rich) Prolotherapy (Journal of Prolotherapy, August 2011). Dr. Alderman lectures and teaches other physicians in these protocols. She is author of the popular book: Free Yourself From Chronic Pain and Sports Injuries: How Prolotherapy Regenerative Medicine Can Help You Become Pain Free, Family Doctor Press, 2nd Edition, 2018.

“FREE Yourself from Chronic Pain and Sports Injuries”

How Prolotherapy Regenerative Medicine Can Help You Become PAIN FREE 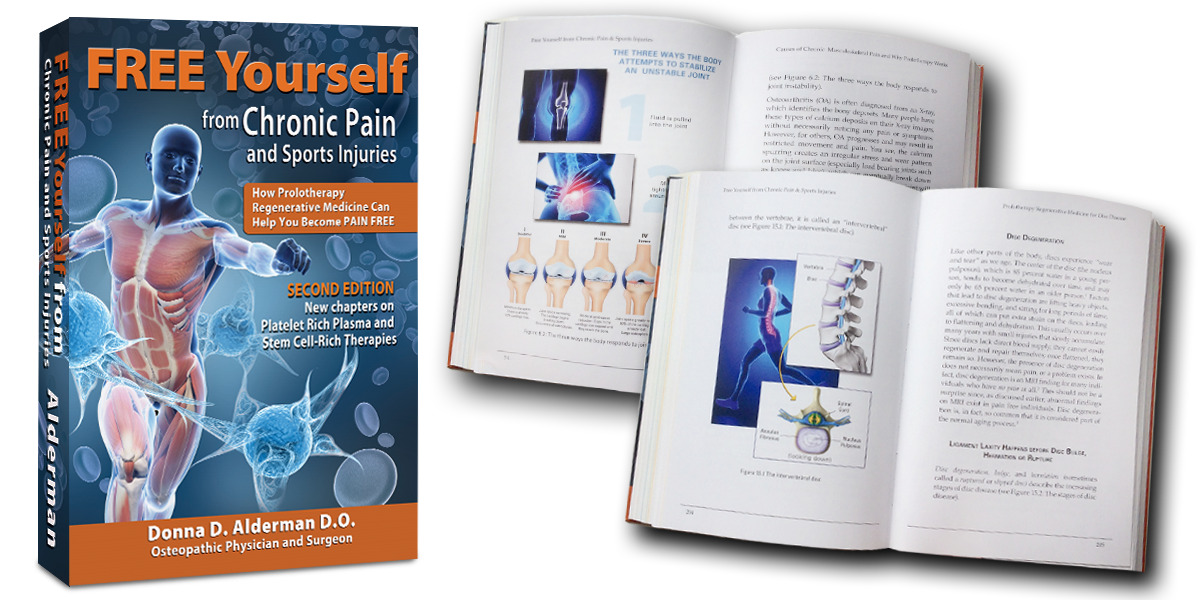