Prolotherapy Regenerative Medicine Is Evidence Based

What this means is that prolotherapy has been evaluated in scientific research studies, and shown to make a positive, statistically significant difference in patient results

Prolotherapy is supported by multiple educational organizations and has its own peer-reviewed journal. Prolotherapy has also been recognized by several premier medical facilities and academic institutions as an option in treating musculoskeletal pain, among these the Mayo Clinic. In April 2005, the Mayo Clinic Health Letter discussed Prolotherapy, stating, “In the case of chronic ligament or tendon pain that hasn’t responded to more conservative treatments—such as prescribed exercise and physical therapy—prolotherapy may be helpful.”[1] Then in March 2010, the same newsletter featured platelet rich-plasma, writing, “Mayo Clinic doctors are optimistic about platelet-rich plasma therapy.”[2] The Mayo Clinic, Department of Physical Medicine and Rehabilitation, currently offers platelet-rich plasma injection therapy, and through its Center for Regenerative Medicine offers stem cell joint injections for certain musculoskeletal conditions.[3] There are also multiple other evidence-based, prestigious institutions that offer regenerative injection therapies, including John Hopkins, Cedar-Sinai, Stanford, and Massachusetts General (teaching hospital associated with Harvard University), among others.[4]

Since the 1930s, thousands of medical studies, reports, books, and papers have demonstrated the effectiveness of Prolotherapy for musculoskeletal complaints. The following is a very abbreviated review of the medical literature, broken down by Prolotherapy formula.

In 1983, a group of researchers showed a significant increase in both the mass, thickness and strength of ligaments after treatment with Prolotherapy, confirmed microscopically.[5] A similar study showed increases in the number of cells, blood supply and new collagen after Prolotherapy injections.[6] Similarly, biopsies of human tissue after a series of Dextrose Prolotherapy injections showed an increase in average fiber diameter from 0.55 to 0.88 micrometers.[7] That’s a 60 percent boost!

Long-term treatment results have also been tracked. Dr. George Hackett, one of Prolotherapy’s pioneers, tracked 1,800 patients; he reported an 82 percent cure rate even 12 years after a patient’s last Prolotherapy treatment.[22] Following in Dr. Hackett’s footsteps in the 1950s, Dr. Gustav Hemwall ultimately treated over 10,000 patients, whose progress he studied over the years. In 1974, he presented his findings to the Prolotherapy Association. He reported that out of 1,827 patients he tracked who completed Prolotherapy treatments, 75.5 percent reported complete recovery and cure, 24.3 percent reported general improvement, and only 0.2 percent reported no improvement. The net result of Dr. Hemwall’s study indicated that 99 percent of surveyed patients who completed treatment found some relief from their chronic pain.[23]

Prolotherapy Studies and the Problem with Saline “Placebo” Injections

A placebo is a medically ineffective treatment given to one group of patients during a study. This is done in a “blinded” fashion (the patient does not know whether he/she is receiving the active or inactive treatment). When there is an expectation that a treatment may work, some patients get better even if given the inactive treatment. In order to reach a valid conclusion about a particular treatment there needs to be a “statistically significant” difference between the active and inactive groups. The classic placebo used in medical injection studies is saline (salt-water). However, since saline can be used as an active Prolotherapy formula, calling a saline injection a “placebo” in the context of Prolotherapy could lead to inaccurate conclusions.

In these types of studies, the outcome may be that both groups (one group receiving dextrose and/or platelet-rich plasma and the other group a saline “placebo”) show improvement. Some study authors have erroneously concluded from such results that since both groups showed improvement that “Prolotherapy, or PRP, didn’t work.” However, that’s actually not a fair assessment; all those results convey is that there was “no statistical difference” between the results of the two groups. The fact is that both treatment and placebo groups received a legitimate form of Prolotherapy and—what do you know—both groups improved! In a study comparing saline and dextrose injections into the TMJ, both patient groups improved, which strongly suggests that both formulas were effective.[24] This is an important “FYI” point to keep in mind when reading research studies designed in this fashion.

Biocellular Prolotherapy is a relatively new type of Prolotherapy. However, over the last ten years, multiple studies related to the use of adult stem cell sources for musculoskeletal complaints have been published. Both bone marrow–derived cells[35] as well as adipose-derived cells[36] have confirmed these injections to promote “significant improvements” in cartilage repair with less progression of cartilage disease.[37] Adipose-derived stem cell knee joint injections were given to 30 older patients (65 years plus); the patients showed “significant improvement” at a two-year follow-up in terms of “pain reduction, effective cartilage healing, and improved function.” On arthroscopic examination, 87.5 percent of these patients also showed improved cartilage status.[38] Additional studies have shown successful outcomes using autologous adult stem cell injections into knees with partial tears of the ACL,[30] patellar tendonosis and tear,[40] large abdominal muscle tear,[41] and Achilles tendon tears.[42]

Prolotherapy has it's own Peer-reviewed Scientific Journal 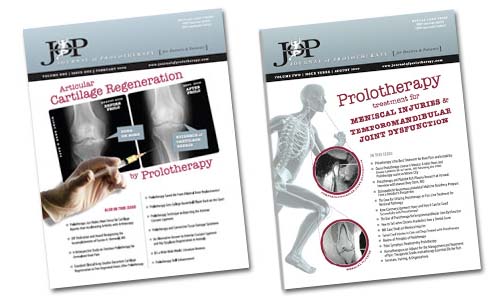 Of additional note is the monthly peer-reviewed scholarly publication Physical Medicine and Rehabilitation Journal (PM&R), which is the official scientific journal of the American Academy of Physical Medicine and Rehabilitation. PM&R has published hundreds of articles on Prolotherapy and the use of regenerative injections for musculoskeletal pain. This is significant in that PM&R states one of its goals is to provide: “the timely delivery of clinically relevant and evidence-based research.”[46]

There are several large educational nonprofit organizations dedicated to teaching and standardizing Prolotherapy protocols. Of particular note is the American Osteopathic Association of Prolotherapy Regenerative Medicine (AOAPRM), which is one of 24 specialty colleges affiliated with the American Osteopathic Association (AOA). This organization is “committed to the long-term education of Prolotherapy,” offering training to physicians since 1938, including annual educational conferences.[47]

Prolotherapy is also taught as part of the curriculum of the University of Wisconsin School of Medicine and Public Health’s Department of Family Medicine and Community Health medical residency program, which also sponsors a Prolotherapy education and research laboratory.[48] Research from this program has resulted in multiple publications that demonstrate Prolotherapy’s value in primary care and musculoskeletal medicine.[49]

The American Academy/Association of Orthopaedic Medicine (AAOM), founded in 1983, offers information and educational programs in all three types of Prolotherapy Regenerative Medicine. In addition to hosting an annual scientific conference, AAOM also offers multiple hands-on injection workshops throughout the year in both the United States and other countries.[50]

The Hackett Hemwall Patterson Foundation, founded in 1969, offers classes, conferences, and clinical training in Prolotherapy; it also organizes educational trips during which medical professionals can provide Prolotherapy to underdeveloped countries through charity clinics.[51] In conjunction with the University of Wisconsin School of Medicine and Public Health, this foundation offers a comprehensive Prolotherapy course each year.

Another organization dedicated to training physicians and furthering the regenerative medicine field is The Orthobiologic Institute (TOBI), which holds an annual seminar for sharing research and advancing regenerative medicine.[52] Although TOBI is a for-profit entity, it is associated with various charities and scholarship programs.

The Insurance Question and the “Experimental” Label

Prolotherapy is supported by multiple professional organizations, universities and valid medical research, including quality peer-reviewed scientific studies and journals. Yet most insurance companies still consider it “experimental” and therefore typically won’t cover it. This has been upsetting for some patients, especially when Prolotherapy has helped them avoid much more expensive surgeries that insurance would have covered. While the wheels of change in the medical world can be slow to turn, it is only a matter of time before this “experimental” label is removed.

Most state boards of medicine determine their definitions of not being “experimental” based on two major factors. One, if a procedure is taught by postgraduate programs for the healing arts and, two, if it is supported by studies that meet certain criteria for research quality. If these things are present, then that procedure is considered to have graduated from the experimental stage.

As discussed earlier, Prolotherapy is taught as an acceptable method of treatment by more than one approved postgraduate program for the healing arts, and there are many Prolotherapy studies that meet the specified research quality criteria.[53] It is true that Biocellular (Stem Cell–Rich) Prolotherapy may fall into the experimental category because it is relatively new and studies are still emerging. However, Dextrose Prolotherapy and PRP Prolotherapy certainly seem to fulfill the nonexperimental requirements.

There are some insurance companies that will cover these therapies. Unity Health medical insurance in Madison, Wisconsin will cover some Prolotherapy treatments when performed by local doctors who have gone through the Hemwall Hackett Patterson Foundation training program. And in 2017, Arkansas passed a new law that grants state employees and teachers coverage for regenerative injection therapies for treatment of orthopedic conditions on their government health care plans. Arkansas is the first state to adopt a policy to include these emerging therapies in state employee health insurance, stating use of these effective regenerative therapies is expected to save the state $100 million as an alternative to more costly surgeries or drugs![54] This is promising, and the hope is that in time other states and/or insurance companies will follow.

Bibliography - See the references cited for this page